The following was published in the December 2016 issue of the digital-only Photography Magazine produced by National Geographic Traveller (UK Edition). Download the free app on iTunes, Google Play, or Amazon to browse more of the articles in these insightful issues.

Although the graduated neutral density filter has long been an essential tool for landscape photographers, it is never one that I’ve owned myself. Ironically I’ve come to love the Graduated Filter tool in Lightroom to selectively darken or lighten portions of my images.

One of the difficulties with photography is that the camera can’t capture the range of light that our human eyes can see. Although I we see highlights and shadows in a high-contrast scene, the camera’s dynamic range can’t capture both ends of that spectrum. While using the aforementioned “grad ND” filter or an HDR (high dynamic range) technique can solve this problem when used effectively, my preference has been to learn when a scene is too high contrast for my camera’s dynamic range and decide to either return when the light is more balanced or look for a different composition.

Therefore, I’m not using Lightroom’s Graduated Filter to try to recover highlights or shadows where detail was completely lost, but I’m instead starting with raw images that are well exposed and using the tool to optimize the image.

For example, I photographed this landscape while riding a gondola up into the Wallowa Mountains of Eastern Oregon. I loved how from that perspective I could show the dramatic change of terrain from rugged mountains to the flat farmland. The camera, set to matrix metering, gave me an exposure that captured all tones of the image from shadows to highlights. Still, mottled clouds darkened portions of the foreground filled with trees while the clouds and sky in the background appeared much brighter. To darken the background sky, the Graduated Filter was the perfect tool. 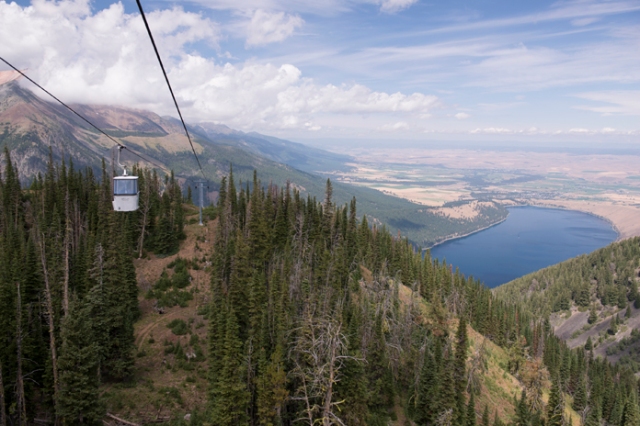 Final version after using the Graduated Filter to darken the sky, plus overall contrast.

While this post-processing tool cannot replicate the physical usage of a “Grad ND” filter in the field, nor can it effectively restore an poorly exposed image, I find it a useful tool to optimize my images. And as with any tool in post production, one has to be careful not to let the tool show.