This past May I joined the Morocco Photography Expedition for National Geographic Expeditions as the National Geographic Expert. Our trip was a combination of cultural exploration and photography instruction. We gathered in Casablanca and set across the pink-hued landscape of Morocco to discover gems like Marrakech, Ait Benhaddou, the Sahara Desert, and Fes. I’ll let the following photos give you a glimpse of the experience:

A visit to Casablanca isn’t complete without a visit to the world’s third largest mosque, the Hassan II which is named after the king who built this mega-structure. The vast interiors dwarf worshippers and visitors alike.

Morocco, and in particular Marrakech, can be challenging for photography because many locals and vendors refuse to be photographed or demand payment. With persistence and patience, I found that a few people were open to having conversations and were happy to allow for photography, such as this man at his dried fruit and nut stand in Djemma el-Fna Square.

France has Monet’s Giverny and Morocco has Majorelle’s beautiful gardens. It is easy to see how the beautiful grounds here inspired the French painter during his time in Marrakech. We spent a lovely morning here exploring the grounds and visiting the Berber Museum.

From Marrakech, we embarked on the “Road of 1000 Kasbahs” and encountered a crumbling kasbah in the village of Telouet. The exterior was in various states of disrepair, but inside the rooms remained awe-inspiring with the intricate tile work.

On the southern slopes of the High Atlas in the Province of Ouarzazate, the Ksar of Ait Benhaddou is an ighrem, or fortified village, along the former caravan route between the Sahara and Marrakech. Wandering through the village at sunset felt like walking amidst giant sand castles and was a highlight of the expedition.

A visit to the Atlas Film Studios in Ouarzazate, the Hollywood of Morocco, took us through Ancient Egypt and Rome and into Tibet on this set from the film Kundun. 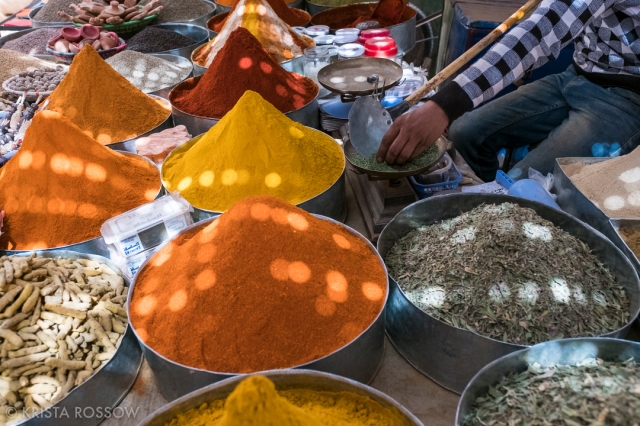 The small town of Rissani was an unexpected photographic delight on the way towards the Sahara Desert. I loved wandering through the main market and photographing the produce and spice stalls as well as exploring the markets where you could buy cows, chickens, and donkeys.

We rode camels through early morning darkness to find a spot amidst the dunes of the Sahara Desert near Merzouga to watch the sunrise. A few of us photographed the Moroccan camel drivers who were passing time while waiting for their guests.

The golden gates of the Royal Palace of Fes were well worth a photo stop.

In Fes, we visited the famous leather tanneries. Although the tanneries are photographically interesting, it was difficult for me not to gag at the putrid odor (mint leaves helped) and I felt conflicted about watching the men work in such unsafe conditions while continuing the traditional method of their leathercraft.

I had thought Marrakech’s medina was a maze, but I was wholly unprepared for the twisting, turning, seemingly endless lanes of Fes el-Bali. Of course, our guides wouldn’t allow us to get lost in the colorful chaos, but I look forward to returning to roam the narrow streets and make more discoveries. 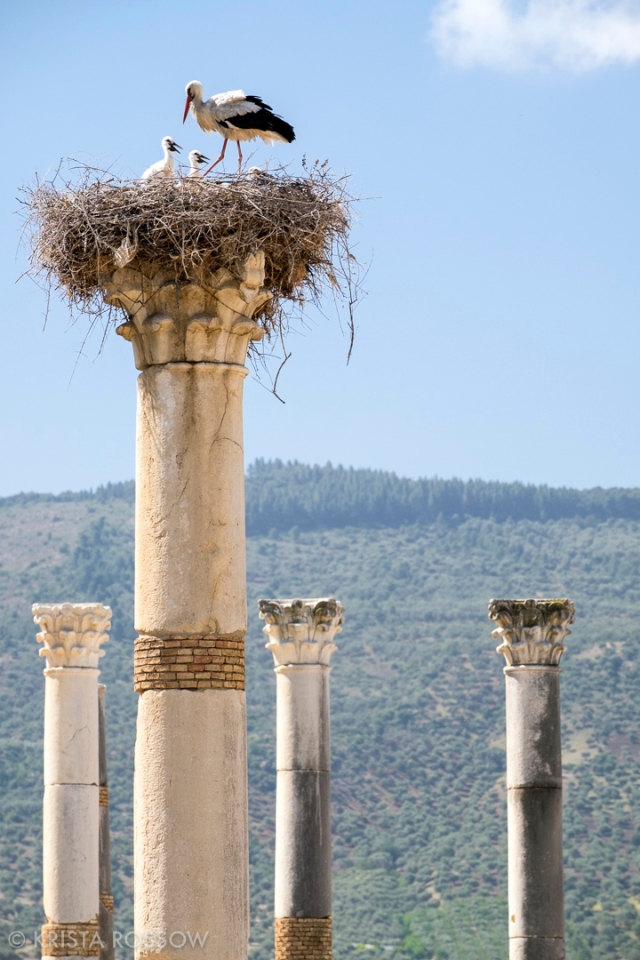 The Roman ruins of Volubilis, a UNESCO World Heritage Site, are a half day drive from Fes. Driving into the countryside filled with wheat fields and olive trees felt familiar to me like the landscapes of Andalusia in Southern Spain. At the ruins, I was delighted by the families of cranes who had made their nests on top of ancient columns.

One of the expedition guests gets approval from a friendly local man at the market in Rissani.

Our expedition group enjoying a sunset and sundowners from a rooftop in Marrakech before one of our many delicious, decadent dinners. It was wonderful to travel with you all!

Morocco was a photographer’s delight! If you’d like to travel with National Geographic Expeditions on this trip in Morocco, I’ll be leading the May 12th-23rd expedition in 2018.